Hi young Nova Player! Before starting it is important first of all to tell you about the Vote4Buff. Vote4Buff is a system through which from the home page of the official site, by logging with your data you can vote for the ranking of the servers: by voting for ours you will receive a temporary bonus, everything will be repeatable after 24 hours. It is important to vote to make the server rise in the rankings, increase community players and have a small advantage in the game that can always be useful.


For a more detailed guide on how to vote check: Vote4Buff


Once you have voted on the site, to get the bonus you will need to log into the game and click on the Vote4Buff scroll, this will be what you can get: 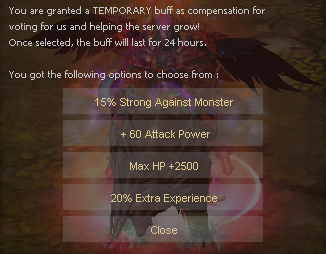 At the first login you will receive an

Apprentice-Chest (I) in which you will receive the basic equipment to start playing! (You can see on the page-link all Chests and their rewards) Turn on the

Mount (you can attack on it immediately).

Teleportation Ring, then Leveling Maps and later on Valley of Seungryong, at last on Mid.
Right from the start you should collect the

Orc Teeth from the Black Orcs and the

Curse Books from the Dark Persecutors because it is useful (if not obligatory) to do the Biologist Quests as you grow in level (it is possible and it is advisable to talk to the biologist using the F7 key with the Quest Manager, so you will only have to go to Baek-Go to receive the rewards).


In the valley of the orcs it is advisable to expose and do the aforementioned missions up to level 40 (considering that one will be released consecutively at 30 and the other at 40), and once this is done you will have enough money to go to the shop and buy the various items to PERMANENTLY upgrade your character, and they are: Rainbow Stones (skill at P1), Attack, Life, Intelligence and Defense of the Dragon God, Critical and Piercing Strike, all kinds of dews that will increase Attack, Defense and more! 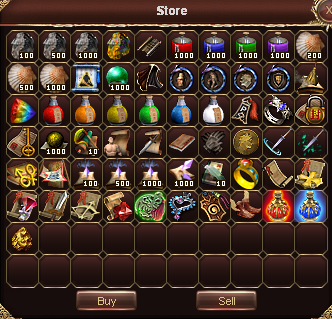 After have done biologist quests you should press F6 (only from level 40) and with the Dungeon Manager teleport to the Demon Tower (Lv. 40) to drop 50

(they are almost 1 mobbed), so once you reach level 50 you can deliver them directly.
The next step is to use the

Teleportation Ring again to go to the Spider-Dungeon 3 in the Leveling Maps and level up to 70.
Now is the time to think about making advanced equipment, so you will have to go to the Weapons and Armor Merchants who will provide you with the necessary equipment for both PvP and PvM.

Specifically, the items you will need for PvM are:

The recommended bonuses for PvM equipment are Critical & Piercing Hit, Absorbed Damage by Hp, % Exp, Yang and Drop Bonus,Strong against Undead, Devil, Attack Value, Attack Speed, Poisoning, and for exp arms of 75 recommend to switch them with 45 Average Damage, later you will have the possibility to get a weapon with 60 averages.


Once the equipment is renewed, you will have to go to Mount Sohan to make the

Ice Marble by the Ice Golems for the mission of the 60 Biologist.

Zelkova Branch (Biologist level 70), and the

Red Ghost Tree Branch (Biologist level 85). The metin recommended for leveling in this map are those of the 95, among all that incandescence, with which you experiment up to 90 or 100. To complete the mission of the biologist of level 80 you will have to go in the Valley of Giants where you will get from all the monsters in the map the

Once you reach level 90, the first farm period will start for you to upgrade your equipment from exp. You can craft both PvP and PvM equipment from the respective NPCs in the main square of the first village of your kingdom and they will ask you for the item you have and white, blue and red pearls. Crafted items WILL KEEP both basic and rare bonuses, as well as stones.

The items that the PvP equipment will ask you for the first steps are mainly:

The items that the PvM equipment will ask you for are mainly :

All the items except the

Poison Marble are easily dropped from the metin 85+ in Akanta Field (Lv. 70 - 100), while the Poison Marble will be more difficult to find. The advice we can give you is to do a rotation of dungeons (accessible with F6, and buying the keys from the Dungeon Shop) that is:

Besides the items up, a lot of money will be needed, which you can "comfortably" farm in the Akanta Cave (Lv. 100+) by the Metin of the Three Beings, Metin of the Forest & Metin of Devil, the latter two will also drop the

Legendary Soul Stones, useful to bring you skills from P1 to L, you will need about 35 to skill, buy the

Concentrated Reading from the General Shopkeeper in the villages.
In Akanta Cave (Lv. 100+) you will have to exp at least until 110 if not at 130 thanks to the three metin indicated above to make money, the undergrowth mobs are among those that give more experience and more money.

The dungeon rotation should be continued for two reasons: the

Leader's Note (50 are required and fail) by the bosses, and up materials that you will also need to upgrade the PvM equipment of 110.
Once the equipment is 90 to +9, and have reached level 110 (ideal for any type of farm or drop, I advise you not to exceed 120 to farm because the drop of both item and yang is greatly reduced) you can go to the Demon Tower (Lv. 40) and upgrade the 90 + 9 equipment to the 110 one without items and with 100% success.

The PvM 110 equipment will be upgraded through the same items as the 90, with the addition of the

Raimbow Vial that if you have followed the advice to farm the Beran, you will already have in large quantities, these last items are also available from Nemeres (Lv. 90) and Razador (Lv. 90) but are longer and more difficult than Aqua Dragon (Lv. 75).

This part will surely be the most challenging because you will have to finish your equipment and it will take longer than the others.

The first thing to do is get to level 125 (if you still need to drop some item up from the old dungeons), alternatively you can directly reach level 130 destroying metin in Akanta Cave (Lv. 100+) or killing monsters in Leveling Maps like Nephrite Bay, Gautama Cliff, Thunder Mountains: in the center of last one it is surely possible to easily level up in a short time.

Now you have to decide what to do first, whether to finish the PvP or PvM equipment, between the two we recommend PvP because it's faster to do.

The items you will need to upgrade the equipment are :

You can drop the Azure Stone doing 3 dungeons:


These dungeons are not particularly difficult, and allows you to enter it once finished every 15 minutes each: if you have items 110 + 9 you will surely be able to complete all 3 before the first can be done again.


To find out exactly how many items up for each up you can see the set pages of this wiki like PvP-Bracelets on the home page.


A note that surely must be said is the 103 earrings are better then azure ones for 1v1 (upgrading those with average strength and skill damage will lose resistance and gain damage, so we recommend make a pair for tank with slots of level 103 and one for damage, the azure one).


Making the final set for PvM and the Mighty Rings + 9 is the part that definitely needs more time.
We need to introduce two new maps and two new dungeons now:

Multi-Crystal Fragments are basic items up for the Demonic equipment and the Mighty Rings, and are crafted with 20

Blue Crystal Shards and 50kk each.

This boss can drops :

the Mazel Boss drops are :